Featured in the Seattle Daily Journal of Commerce, an article by John Kane about a new software system from BluHaptics that allows operators to see sunken munitions in 3-D and retrieve them with remotely operated vehicles that provide human touch-like feedback.

​Kane Environmental and Kane Remediation Technologies are working with a Fremont-based robotics software company, BluHaptics, to apply its new software system using remotely operated vehicles (ROVs) to identify and remove munitions from the sea floor and to sample remote deep water sediment where human divers cannot go. BluHaptics developed the software that uses data fusion, machine learning and control technology to make ROV operations more efficient. The software works with a wide variety of ROVs, sensors and manipulator arms, which allow for operation in the most challenging conditions, such as high turbidity. ​Click here to read more.

​John Kane: Board of CleanTech Alliance 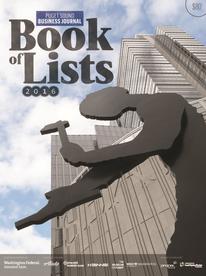 Puget Sound Business Journal Book of Lists provides listings of hundreds of the hottest area companies in their fields, by ranking.

KANE CEO/President, John Kane, attended the Third Edition of the Aerospace & Defense Supplier Summit on April 14 - 15, 2016, at the Washington State Convention Center in Seattle, Washington. Kane was an exhibitor in the Green Aviation Village.
Aerospace & Defense Supplier Summit Seattle is a supply chain event that brings together aerospace and defense primes, tier suppliers and contract-manufacturers. Engineering, procurement, supply chain, fabrication, commodity teams, suppliers and service providers will meet through pre-arranged one-on-one meetings. A&DSS Seattle is the venue where requirements meet technologies and capabilities without the distractions found at traditional exhibitions. 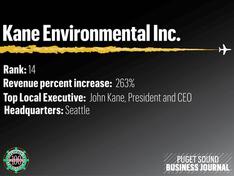 Kane Environmental has been recognized as the 14th Fastest Growing Private Company in Washington for 2014. The Puget Sound Business Journal published the top 100 companies in their October 10th issue.

Thank you for making this possible! We are happy to be able to help solve environmental issues in Washington and nationwide. Let us help you with your next project! Find out more about the services we provide here.

May 30, 2013 – Join Kane Environmental and other business and civic leaders on June 6, 2013 at the Northwest Environmental Business Council Conference on Re-Using Contaminated Land, Transactions and Technologies.  It will be held at the Greater Tacoma Convention & Trade Center in Tacoma, Washington. We are pleased to be a a premium sponsor and exhibitor at the conference. Stop by our booth to learn how we can assist you with your environmental needs.

Supporting maritime industry through sponsorship of The Promise of the Arctic

May 28, 2013 – Kane Environmental, Inc. announces its sponsorship of The Promise of the Arctic, a policy-driven conference that seeks to explore the opportunities, and challenges, of the harsh Arctic environment.

The two-day conference begins on Wednesday, May 29, 2013 at the Bell Harbor Convention Center in Seattle.

Music is My Life, an art exhibit featuring works by Seattle’s homeless teens

Kane Environmental is proud to be a sponsor of Music is My Life. The art exhibit consists of drawings and stories by 129 homeless young people, aged 15-25. The show takes place May – August 2013 at Molly’s Café at the Henry Art Gallery at the University of Washington.